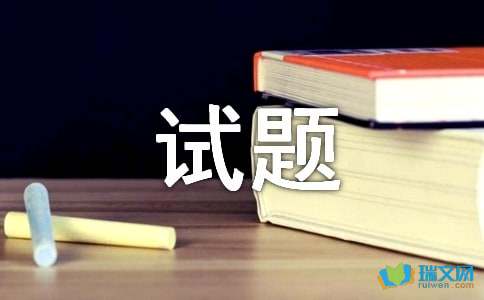 B．Yes, the first one is.

B．They are going to skate.

C．They are going to play.

D．They are going to play basketball.

A．Are you going to wash your clothes

B．Do you often wash your clothes

C．What are you going to do

D．What do you often do

A．How long is it from our school to the farm

B．How far is it from our school to the farm

D．Is the farm five kilometres from our school

35．Please____ your old clothes when you do some cleaning at home.

48．We are going to play basketball this afternoon. ____ you?

B: Once every week.

B: At half past six.

56．A．He likes mooncakes with meat in them.

58．A．We had a good time yesterday.

B．____you have a good time yesterday?

59．A．Must I clean the room after supper?

60．A．They're going to do some shopping this afternoon.

B．What are they going to ____this afternoon?

61．The students____(pick) lots of apples on a farm last October.

B: Good afternoon! I'd like to buy a shirt for my daughter.

A: This way, please.

B: The yellow one on the left looks very nice. 72

A: All right. Thank you.

E．What about the red one over there?

Alice was a few minutes late. Mr Green had left 76 when she got to the building. His secretary（秘书）told her he would be 77 in a few minutes. Alice had to sit down and 78 .

“I'll never get the job, ”she told 79 . For a moment, she wanted to run 80 the building. Just then, Mr Green came back to the office. His secretary took Alice in and 81 her.

Alice apologized for being 82 . Mr Green did not seem to 83 . They 84 for half an hour. Then Mr Green asked Alice if she could start to work soon. Alice was very 85 to hear that. It seemed she had got the job!

Once there was an old farmer. He had a horse and the horse was almost as old as himself. One morning he set out with his young son to sell the horse before it died. The father and the son walked because the farmer did not want the horse to be too tired（疲劳）.

They met two men on the road. They said, “Why are you walking, farmer? You have a horse. It's a long way to get to the market. ”The farmer knew that this was true, so he rode on the horse while his son walked.

Then they met two old ladies. “What are you doing up there, farmer? Can't you see how tired your son is? ”So the farmer got down, and let his son ride on it. Twenty minutes later, three old men stopped them. One said, “Why are you walking, farmer? Get up, It's too hot for an old man like you to walk today. ”So the farmer got up behind his son and they went on riding.

Some time later, a young woman passed them. “Why aren't you walking? ”she asked,“It isn't far to the market. Give your poor old horse a rest. ”

So the farmer and his son got down once again.

It is a fact that you cannot please all the people all the time.

A．nearly the same age as his horse

B．almost always older than his horse

C．not quite as old as his horse

D．a little older than his horse

A．asked how far it was to the market

C．asked why the farmer was not riding on his horse

A．the farmer to ride such a tired horse

B．the farmer to ride while his young son walked

C．the boy to ride instead of his father

D．only one person to ride such a long way

B．the three old men stopped them on the road

C．he did hot know why he was walking

D．his son could not ride the horse by himself

90．What did the writer really want to tell us?

A．The old man was a fool

B．The horse was old and was going to die

C．It is not right to listen to others

D．It is impossible for a man to make everyone satisfied（满意）all the time.