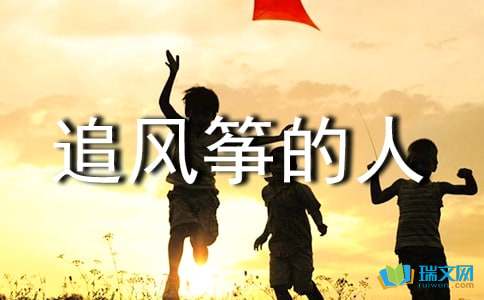 The novel begins a story about two boys.Amir is born in a rich family.Hassan is his servant as well as close friend.They both lose mother from birth and grow up like brothers.Hassan is very loyal to Amiar,but Amiar sells him.Many years later,Amir has settled down in America for years and established a family,but Hassan died for protecting Amir's luxury house in Afghanistan and leave an orphan.Accidentally,Amir gets to know a big secret and decides to atone for his crime that hound around him from childhood.

At the first place,I have a feeling of being cheated by the writer.The novel first attracted me before because it set its plot in a special environment---Afghanistan which even I often got news about from TV and newspaper,I knew the country utterly ignorant except wars and terrorism.So I wanted to understand more about the calamitous country.However,I am disappointed by the novel which just use a special background environment to tell a so-called travel of human nature .The theme of the novel should be atonement if it was taken off flowery coat.Bad gay like Amir and and good gay like Hassan,adding some the present best sellers' polular elements like bastard,forming the main contents. In fact,the kite runner impressed me deeply and it just depends on sensational words.Besides,what makes me most dislike is that the writer,an Afghan-American,contorted some political elements for American advantages.The history background only make the affair of Russia invading and Taliban dictators go into particulars,but not mention America's ignominious role in this politics.Why Taliban dictators are so unruly?Why Russia invaded Afghanistan in 1979?Why Afghan people still live in poor condition nowadays?America,a main actor is disposed of in this novel.

I even feel I am wrapped around the American media's little finger.Many celebrities and book concerns writed good comments,which helped it ranke first on sales volume for several times and made readers think it must get widely praised and then bought it without doubt finally.

This is a wonderful, beautiful epic of a novel. Set in Afghanistan and the United States between the 1970s to the present day, it is a heartbreaking tale of a young boy, Amir, and his best friend who are torn apart. This is a classic word-of-mouth novel and is sure to become as universally loved as The God of Small Things and The Glass Palace.

Twelve year old Amir is desperate to win the approval of his father Baba, one of the richest and most respected merchants in Kabul. He has failed to do so through academia or brawn, but the one area where they connect is the annual kite fighting tournament. Amir is determined not just to win the competition but to run the last kite and bring it home triumphantly, to prove to his father that he has the makings of a man. His loyal friend Hassan is the best kite runner that Amir has ever seen, and he promises to help him - for Hassan always helps Amir out of trouble. But Hassan is a Shi'a Muslim and this is 1970s Afghanistan. Hassan is taunted and jeered at by Amir's school friends; he is merely a servant living in a shack at the back of Amir's house. So why does Amir feel such envy towards his friend? Then, what happens to Hassan on the afternoon of the tournament is to shatter all their lives, and define their futures.

The Kite Runner of Khaled Hosseini's deeply moving fiction debut is an illiterate Afghan boy with an uncanny instinct for predicting exactly where a downed kite will land. Growing up in the city of Kabul in the early 1970s, Hassan was narrator Amir's closest friend even though the loyal 11-year-old with "a face like a Chinese doll" was the son of Amir's father's servant and a member of Afghanistan's despised Hazara minority. But in 1975, on the day of Kabul's annual kite-fighting tournament, something unspeakable happened between the two boys.

Narrated by Amir, a 40-year-old novelist living in California, The Kite Runner tells the gripping story of a boyhood friendship destroyed by jealousy, fear, and the kind of ruthless evil that transcends mere politics. Running parallel to this personal narrative of loss and redemption is the story of modern Afghanistan and of Amir's equally guilt-ridden relationship with the war-torn city of his birth. The first Afghan novel to be written in English, The Kite Runner begins in the final days of King Zahir Shah's 40-year reign and traces the country's fall from a secluded oasis to a tank-strewn battlefield controlled by the Russians and then the trigger-happy Taliban. When Amir returns to Kabul to rescue Hassan's orphaned child, the personal and the political get tangled together in a plot that is as suspenseful as it is taut with feeling.

The son of an Afghan diplomat whose family received political asylum in the United States in 1980, Hosseini combines the unflinching realism of a war correspondent with the satisfying emotional pull of master storytellers such as Rohinton Mistry. Like the kite that is its central image, the story line of this mesmerizing first novel occasionally dips and seems almost to dive to the ground. But Hosseini ultimately keeps everything airborne until his heartrending conclusion in an American piCnic park.

It's a moving story and a mixture of love,fear,guilty,atonement and so on.For a lont time,it makes the books we read lost their color.

The first time I read a book written by an Afghan atuhor named Khaled Hosseini ,it told a story between two boys.A rich boy Amir at the age of 12 and his servant Hasan were brotherly loved.Nevertheless,afer a kite game,something miserable happened.Amir feel grievous and guilty for his cowardice and he cannot confront Hansan,using something contempitable to let Hansan and his father leave his home.Not long,Afghanistan broke ou a war,Amir and his father had to fled to America.After his grown- up,he cannot forgave what he had done to Hansan before.And to atone for himself,he returned his hometown,which was destoryed badly by the war……

Maybe all of us more or less had done something as Amir did before,we are too young to understand others feelings when we broke their heart into pieces.We may feel guilty and miserable for waht we have done.But there is no use to cry over spilt milk.What we really should do is to face the reality and like Amir,to atone for ourselves.

I have seen the novel's name --the Kite Runner many times from the InterNet,when it comes to "the novels moved you most".With curiosity,I downloaded it.When reading the novel,from the beginning to the end,I felt a heavy stone of sorrow on my heart.

It is a story about friendship,about fault and atonement,about the good and evil of human natual.

The narrator of the story,Amir ,is born in a rich family.Hassan is his servant as well as close friend.They both lose mother from birth and grow up like brothers.

From Hassan ,I see the most kind and beautiful soul.He never means to hurt anyone.he protects Amir bravely and has a broad mind to endure what Amir do to him.With the promise to run the kite,he hands the last cut kite to Amir though he has insulted by the bully,Assef. for lifetime,he cherishes the friendship,even he dies of protecting Amir's house."For you,a thousand times over"he does as he says…

If Hassan can be described as an angel, then Amir is just a person.when he is a boy,he is badly want father's love and care.he will be jealous,he will fear and be cowardly.When he sees Hassan insulted by Assef,he is so scared that he only hides and watches.he sees what happened but keeps it as a secret.In order to escape the guilt,he makes another fault, making Hassan leave by framing Hassan .Years past, he is still haunted by betraying his childhood friend.

I was shocked when the big secret reveals: Hassan is Amir's half brother,the son of his father and a sevant's wife! Amir's father lives a torturing life,he is torn into two parts.He can't give Hassan the love in the name of a father,which is unfair to Hassan.That explains why he seems care little about Amir …

Knowing the truth,Amir has a painful struggle at the first,and finally chooses the right way,a way of atonement.He rescues Hassan's orphan ,Sorhab,from Assef's hand.At that time,he faces up to Assef's fists,being a man not cowardly.Having gone though a lot of difficulties,he finally brings Sorhab to American.But Sorhab is emotional damaged by adversity.Amir make efforts to revive the little heart.At the end of the story,Sorhab shows a lopside smile,which delights Amir much.Amir run kite for Hassan's son,and says what Hassan once said,"for you, a thousand times over".The snow will be melt,and the spring is coming…The ending is not clearly told,but full of hope.

I like the author' written style.There's paragraghs of internal monologues,warm memorys , sad plots,horrible war scenes…the words,sentences always catch me tightly,make me think,make me cry…Now if someone ask me what novels impressed me most,The Kite Runner will be an answer.

It is the first time I have seen a novel in English.It is hard for me to insist on reading as there are so many words I have to look up.But it really benefit me in some way.

I hate wars which make the world bloody ,cold and cruel, so I do not want to talk about the war. But it is miraculous to see a kite is cut off by another one. And the kite which is cut off flies away like a free bird. Hassan said to Amir that for you, one thousand times over. At first, I tought the friendship between Hassan and Amir was so deep. But then I found that Hassan was a servant in Amir’s home and began to realize it is some kind of loyalty.

Though Hassan always said that Amir treated him as a friend, deep in his mind, he did not put them on the same line. In his eyes, Amir is the person he should look up to and protect, even do whatever he can do to help. Amir was affluence in material, but he did not have friends because of his race. I dislike him because he always ran away when Hassan was hurted by the others in order to protect him. In my opinion, if he stand up fo Hassan, things would have been different. I could not understand why Amir cheated to make Hassan leave at first, though their “friendship” is complicated. Now I come to know that Amir may try to push Hassan out of the position as a servant. And he wished that they stand in the same line and Hassan can chase for the things wanted by himself. Though Amir’s father said that a boy who won’t stand up for himself, becomes a man who won’t stand for anything, Amir finally turned into a brave man who standed up for Sohrab, the son of Hassan.